I grew up in Annandale, VA, where I attended Annandale High, then went on to the Ringling School of Arts in Sarasota, FL. After a year there, I transferred to VCU (originally RPI) in Richmond, VA where I got my Bachelor of Fine Arts in 1968. I did my graduate work at the University of North Carolina in Greensboro. After teaching at the North Carolina School of the Arts in Winston Salem, Richard Bland College in Petersburg, and the Jewish Community Center in Richmond, I finally settled in Hanover County near Glen Allen.

It was in 1972 that I created the first of my flying machines. I discovered on a Monday that I was mistakenly listed in the program as an exhibitor at a Roanoke art show scheduled to open Thursday of the same week. I was able to put together four flying machines that were very well received. In fact, demand for the machines eventually became so great, I found I had little time for anything else. 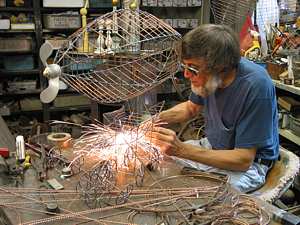 After a couple of years of non-stop flying-machine production, I was finally able to return to wood carving, which has always been my first love. I try to let my sense of humor and whimsy show through in my work and that seems to be most evident in my carvings.

I've always had a great fondness for mechanical toys. Although my wheeled sculptures aren't really meant to be used as toys, the connection is certainly obvious. Most of them are more than strong enough to allow a small child to ride aboard though and children seem to enjoy them as much as the adults.

All of the tables were done for a single show in 1999 that I did with an artist friend, Mary Lou Deal. I built the tables and she painted the tops. It was my first and, so far, only collaborative effort but the results were very pleasing for both of us.

Much of my garden art is relatively recent. So much of art has to be kept in protected environments. Even sculptures designed for outdoor use are often confined to museums or major buildings. I wanted to create some whimsical works that were affordable and accessible to anyone. These pieces actually embrace the elements and develop a patina that only improves over time.

Copyright, 2009, Clifford Earl - All rights reserved.
No images may be used without permission of the artist.