I created the first flying machines in 1970 when I found myself with some silk scraps and a new invention—the electric glue gun. I was looking for a way to attach the silk to the wing structures and found that the glue gun worked well ( if slowly—it takes no less than six hours to put the silk on a dirigible! )

In 1979 I carried six planes up to the Smithsonian and walked in cold to see if they might be interested. They ended up giving me a glass kiosk in the gift shop in the Air and Space Museum and sold a Wright flyer in their catalogue. People STILL mention this at nearly every show!

Many of these thirty year old planes are still around and occasionally find their way back to me for refurbishing or cleaning. I'm amazed at how well they have held up over the years. Many people have continued to add to their fleet and have three, five, and even eight hanging.

The balloons and biplanes seem to be the most popular. The fantasy ships started when I needed a large centerpiece for a show in NYC at the Fairtree Gallery (since closed). These large works allow me to add a lot of things like kitchens,libraries, music rooms, and intricate engines that won't fit in the smaller pieces.

I think a lot of this came from sitting in the shop looking at all those old Popular Mechanic's magazines that I got when I was about ten (I've still got them). The little figures are made of poplar and each one is individually fitted to every plane after painting. The propellers are also mostly hand cut on the bandsaw (quite a trick!). 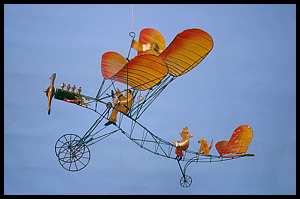 Plenty of room for a couple of passengers in this biplane. You can almost feel the wind in your hair (man or beast). These typically range from 18 to 36 inches long

Passengers travel in real luxury on this deluxe flying machine. There's even time for a little fishing along the way. Dirigibles are available in sizes from 18 to 36 inches. 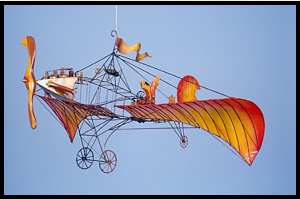 Here's a machine designed for the adventurous type who likes to rule the skies. There's plenty of power in that three-cylinder engine! Planes of this type range in size from 18 to 36 inches. 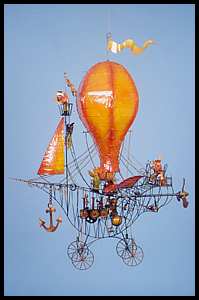 "Fly me to the moon". Fantasy ships can take you and your crew wherever your imagination leads. These ships can be up to 6 or 7 feet long

Copyright, 2009, Clifford Earl - All rights reserved.
No images may be used without permission of the artist.